In the Fourth Assessment Report from IPCC (2007), the coastal Mekong Delta is mentioned as a hotspot for climate change, with an extreme relative vulnerability (more than 1 million people directly affected by 2050) to coastal erosion and land loss, primarily as a result of decreased sediment delivery by the rivers, but also through accentuated rates of sea-level rise with impacts exacerbated by human pressures.

Climate change has been posing a greater flooding threat to the Mekong Delta as a result of rising sea levels near low-lying land at the mouth of the delta and increased rainfall. Among the climate change impacts to-date, the Mekong Delta has experienced a 30% annual increase in rainfall, shifting rainfall patterns, an average temperature increase of 0.5oC over the last 30 years, and an average sea level rise of 3mm per year over the last 30 years. The impacts of climate change are predicted to be more severe, with projected increases in average temperatures of 1.1oC to 3.6oC as compared to average temperature during the 1980-2000 period. The average level of sea level rise is estimated at 28-33cm by 2050 and 65-100cm by 2100. 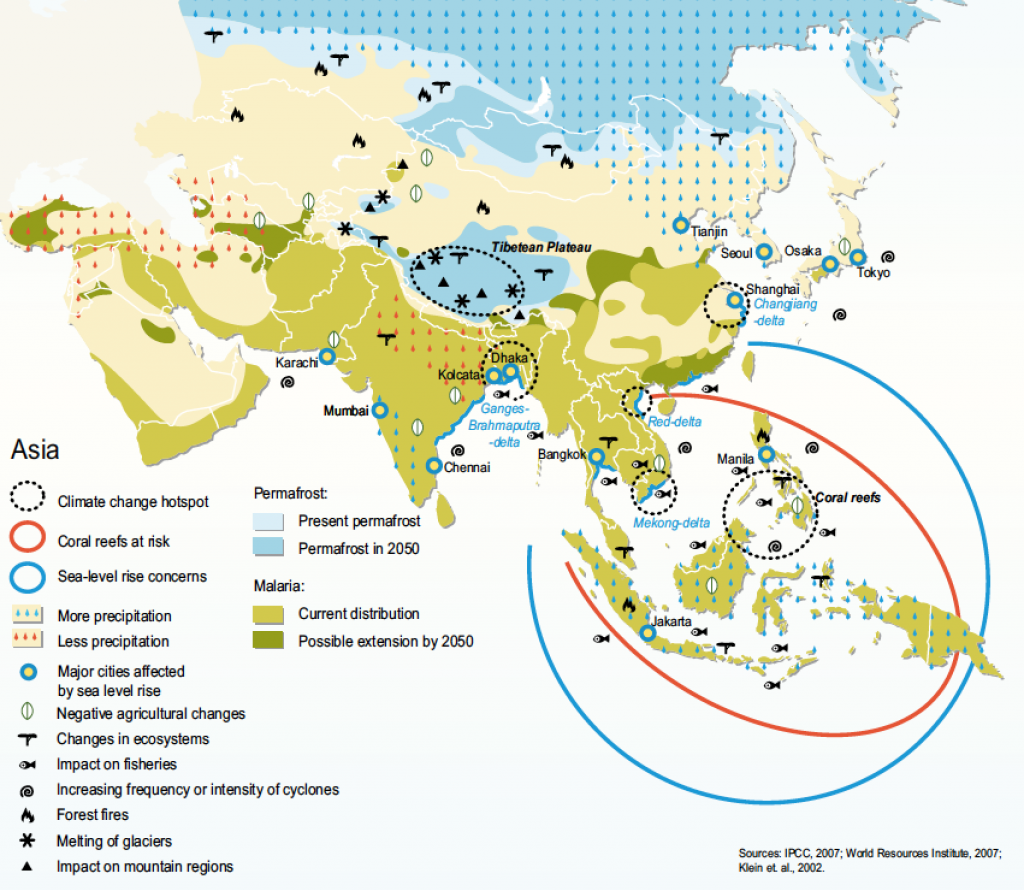 Climate change has been posing a greater flooding threat to the Mekong Delta as a result of rising sea levels near low-lying land at the mouth of the delta and increased rainfall. Among the climate change impacts experienced to-date, the Mekong Delta has experienced a 30% annual increase in rainfall, shifting rainfall patterns, an average temperature increase of 0.5oC over the last 30 years, and an average sea level rise of 3 mm per year over the last 30 years. The impacts of climate change are predicted to be more severe in the coming years, with projected increases in average temperatures of 1.1oC to 3.6oC as compared to average temperature during the 1980-2000 period. The average level of sea level rise is estimated at 28-33cm by 2050 and 65-100cm by 2100. Furthermore, the maximum flow of the Mekong is estimated to increase significantly, while the minimum monthly flows are estimated to decline, leading to increased flood risks during wet season and an increased possibility of water shortages in dry season.

The main challenges and risks related to water resources management and land use planning in the Mekong Delta can be categorized for three hydrological zones:

Since the Doi Moi renewal policy, Vietnam has pursued a “rice first policy” that aims at maximizing rice production for export and domestic food supply. At present, a total of more than 800,000 hectares is used for triple crop rice harvesting in the delta. To enable the cultivation of the third rice crop during the flood season, high dykes are built in the upstream floodplains of the delta, which keep the floodwaters out.

The presence of these high dykes has altered the hydrology of the delta in a major way, as a large part of the floodplains in the Long Xuyen Quadrangle have lost their floodwater absorption and retention capacities. The resulting decrease in sediment disposal leads to higher production costs from increasing use of fertilizers and agrochemicals, resulting in reduced water quality in rivers and canals in rice farming areas. The high dykes also prevent fish fingerlings from entering the floodplains, resulting in increased vulnerability for poor households that are the most dependent of captured fisheries.

In the delta peninsula area, groundwater levels are continuously falling due to overexploitation of groundwater aquifers as an additional source of fresh water to control salinity levels in shrimp farming and to enable the diversification of production into vegetables and homestead production (both in rice and shrimp areas). In the dry season, groundwater levels already drop to 15-20m below the surface. There are strong indications that depleted ancient (Pleistocene) are not (or very limited) replenished from surface waters. This raises the concern that future groundwater use is highly unsustainable.

In addition, recent research provides evidence that land subsidence related to groundwater extraction has gradually accelerated in the past decades with highest sinking rates at present. Current average subsidence rates due to groundwater extraction in the best estimate model amount to 1.1cm/yr., with areas subsiding over 2.5cm/yr., thus outpacing sea level rise by an order of magnitude. As a result, subsidence acts as a catalyst, increasing vulnerability to storm surges and saltwater intrusion in the channels.

Satellite monitoring shows large-scale shoreline erosion and land losses between 2003 and 2016 that now affects over 50% of the once strongly advancing >600 km-long delta shoreline. The erosion pattern, with no identified change in the river’s discharge and in wave and wind conditions over this recent period, is consistent with: (1) a reported significant decrease in coastal surface suspended sediment from the Mekong basin that may be linked to hydropower dam retention of its sediment, (2) large-scale commercial sand mining in the river and delta channels, and (3) subsidence due to groundwater extraction. In the coastal area of Ca Mau and Kien Giang, the sea dyke system with an average height of 1,2m still provides adequate protection for most districts[3], however longterm vulnerability is assessed high and shoreline erosion is already resulting in first resettlements of coastal populations.

The Mekong Delta has a mangrove forest area of about 50,000 ha. Due to erosion and cutting forest for aquaculture and inshore fishing, the loss of coastal mangroves is around 500 ha/yr  (about 1%) and many coastal parts of Bac Lieu, Ca Mau and Kien Giang have no mangrove forest belt seaward of the sea dykes. The area used for aquaculture increased dramatically from a total of 200,000 hectares in 1995 to approximately 750,000 at present. Untreated wastewater from aquaculture, especially intensive shrimp ponds, is released directly into the adjacent waterways, creating local conflicts between water users, and affecting coastal fisheries.

The coastal water around the Mekong Delta, known as the Mekong Plume, receives the Mekong outflows and influences the hydrology of the delta through its tidal effects. It is estimated that out of the 160 million tons per year of the Mekong sediment load, about 100 million tons and 16,000 tons of attached nutrients reach the coastal plume annually, not including the sand load. The freshwater outflow influences salinity levels and suspended sediments and nutrients, and sand loads reaching the coastal water play a vital part to the geo-morphological formation of the delta, maintaining and advancing the coastline, and supporting the productivity of the coastal fisheries.

The annual fish catch in the coastal waters of the delta is about 500,000-700,000 tons per year, employing about 25,000 fishing vessels, thus constituting a significant component of the delta economy. However, fisheries' indicators and surveys for Soc Trang, Bac Lieu and Ca Mau provinces already show downward trends and indicate that 70% of catched are composed of young and immature fish and catch rates from trawler fleets show a 30-40% decline in shrimp catches. Up to date, the importance of the coastal waters has been poorly recognized in development planning for the delta.

Upstream developments are expected to cause severe impacts on the delta. At present, seven dams have been built in the Upper Mekong Basin (UMB) in China. Another 11 dams are being planned on the mainstems of the Mekong in the Lower Mekong Basin (LMB). The potential impacts of the upstream Mekong dams on the delta include impacts on sediments, fisheries, and flows. Data from the Mekong River Commission (MRC) show that after the construction of the 7 dams in the UMB, the annual suspended sediment load of the Mekong has reduced by 50% from 160 million tons in 1992 to 85 million tons in 2014.

The Strategic Environment Assessment commissioned by the MRC in 2010 projected that the annual suspended sediment load would be halved again to 42 million tons after the completion of the 11 dams in the Lower Mekong Basin. The dams will also trap 100% of the bedload (sand and gravel).

The reduction of sediments, especially the suspended sediment is expected to have significant impact on the soil fertility and farming costs in the Mekong Delta. The reduction of the bedload will cause impact to the river morphology and the coastline.

The dams, especially the 11 dams in the LMB are projected to have serious impact on the wild capture fisheries in the delta. It is projected that after the construction of the 11 dams, 100% of the white fish populations in the delta will disappear due to barrier effects of the dams that prevent the fish from migrating upstream for breeding. The disappearance of the white fish species will have serious implications to the food chains of the wetlands ecosystems of the delta and affect nutrients and health of people in the delta, especially the rural poor. The productivity of the coastal fisheries is also expected to be affected with the reduction of the sediment-attached nutrients that the river brings out to the coastal Mekong Plume water annually.